On this page I will provide brief answers to the most frequently asked questions about Syrian hamsters. I shall be adding new questions periodically, but obviously I can't answer every query here and if you have a question that is not covered, I would suggest joining one of the friendly advice forums listed under the Links page.

Below is a list of the questions currently included on this page; please scroll down to read the answers.

1. CAN I PUT MY SYRIANS TOGETHER TO PLAY?

No. You must never ever put 2 Syrians together, even for a few seconds. They can launch an attack very quickly and cause fatal injuries before you even see what's happened. Syrians hate each other, basically, and it stresses them out even to sniff another Syrian through a set of bars (in a playpen for example). If you have 2 Syrians, have a gap between their cages or put a piece of cardboard or plastic between the cages. Having them in the same room is fine as long as the cages aren't touching.

These are his scent glands and are perfectly normal, so don't worry. Both male and female Syrians have these. They are used to scent-mark an area of territory (which is done by rubbing their scent glands on an area). Often, hamsters will lick their scent glands, causing them to look wet or pluck the fur out, causing bald patches.

The photo on the right shows the location of the scent glads on a Syrian.

3. MY SYRIAN IS FROZEN WITH HER TAIL IN THE AIR

Nothing is wrong, don't worry. She is doing this because she is in heat. Hamsters come into heat once every 4 days. If you touch a female's back or rear end during this time, they may freeze and put their tail in the air. This doesn't cause them any harm and they will un-freeze if you don't touch them for a while. You may also notice that female Syrians give off an unpleasent scent when they are in heat. NB: If your 'male' hamster is doing this then it is a female!

4. WHY DOES MY HAMSTER SLEEP SO MUCH/CAN I WAKE HIM UP?

It's not a good idea to wake a hamster up during the day, as this is like waking a human up in the middle of the night - they wouldn't be very happy! If a hamster is startled or poked at during the day they may even bite.

5. WHY DOES MY SYRIAN RUB HERSELF AGAINST THE SIDE OF THE CAGE?

Syrian hamster have scent glands on their hips and they wipe themselves against objects to leave their scent. It is a way of claiming an area as their territory. They may even scent humans! Females do this more than males.

6. WHY DOESN'T MY SYRIAN USE HIS WHEEL/HOUSE?

This is probably because they are too small for him. The wheels and houses that come with cages are too small for fully-grown Syrians. You will need to replace the wheel with one that measures 8" in diameter and you can buy a larger hut for them to sleep in or provide a cardboard box (see the toys sections for suggestions).

7. MY HAMSTER HAS BIG LUMPS ON HIS BUM! 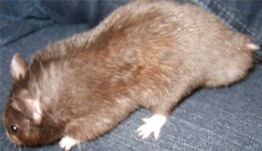 Don't worry, these are probably his testicles and these can often by surprisingly large on rodents. They will seem larger in warm weather and, often, one will hang lower or seem larger than the other. Sometimes, the testes will be covered in fur, usually in darker colour hamsters such as blacks. They may be very pink in colours like cinnamon and may be pink with black speckles in creams, sables and minks. If a female has 'lumps' like this, then I'd say that she has probably been wrongly sexed and is male!
The photo on the left shows a male hamster with clearly visable testes.

8. HOW LONG DO SYRIAN HAMSTERS LIVE?

The lifespan of a Syrian hamster is around 2 - 2.5 years. However, this is assuming that the hamster does not get ill and dies naturally of old age. In my experience, very few Syrians actually die of old age. Most of my Syrians have developed fatal illness between 18 months and 2 years old. Obviously all hamsters are different and some may live longer than this or die at a younger age for no apparent reason.

9. SHOULD I BATHE MY HAMSTER?/CAN HAMSTERS SWIM?

No, you should never bathe your hamster. Hamsters wash themselves like cats, using special saliva and do not need bathing. Hamsters can swim to an extent, but they should never be put in water. Getting a hamster wet is dangerous as it can give them a chill and cause them to get sick. It would also cause them stress and could lead to stress-related illness, such as wet tail. A hamster would never choose to swim or get wet in the wild.

10. HOW CAN I PREVENT OVER-GROWN TEETH AND NAILS? 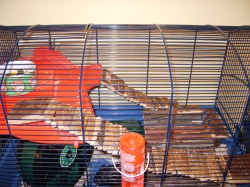 To prevent over-grown teeth, make sure your hamster has plenty of things to gnaw on. Most pet shops sell wooden blocks and things in the shape of fruits, for example. These aren't very effective as most hamsters ignore them. They prefer to chew on things like cardboard boxes/tubes or hard-baked treats such as honey sticks. I provide my hamster with the dog biscuits called Biscrok or milk bones as these are safe for hamsters. Female hamsters chew on things a lot more than male hamsters. If a hamster has these things to chew, the teeth will usually not become over-grown.

To prevent over-grown toe nails, provide your hamster with wooden toys such as wooden bridges, huts and ramps for example or a rough stone or terracotta tile to stand on. I always replace any plastic ladders with wooden ramps, as shown in the photo, which can be bought from ebay. NEVER PUT SANDPAPER IN YOUR HAMSTER'S WHEEL as this will cut their feet.

11. WHICH FOODS ARE SAFE FOR HAMSTERS? 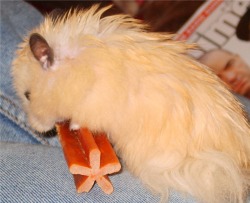 Harvey negociating a dog chew
This page provides a full list of safe and unsafe foods for hamsters:
http://www.hamstercentral.com/wiki/Safe_and_Unsafe_Food_and_Plants

Personally, I feed a basic mix of Harry Hamster with lentils and barley added. For a treat, I then feed one small portion of one of the following each day: a small piece of a vegetable (such as carrot, broccoli, spinach), a piece of cooked pasta, a tiny bit of wholemeal toast, a piece of chicken, a spoonful of porridge or a shop-bought treat such as a yogurt drop. Note that these items are treats and hamsters do not need them to survive. Hamsters do not need a bowl of vegetables each day - feeding too much veg will give your hamster diarrohea, which could be fatal in severe cases. An appropriate daily portion would be half a spinach leaf, for example.

Once a week I give each hamster a larger treat, which lasts them the week. I would give them one of the following per week (or fortnight, depending how long it takes them to eat it): a Pedigree Biscrokbiscuit, a Pedigree DentaStix, an egg biscuit, a Vitakraft Ravioli. Basically, anything that's dried and larger than a daily portion is suitable for a weekly/fortnightly treat.